The Stone Bearers by Jacque Stevens 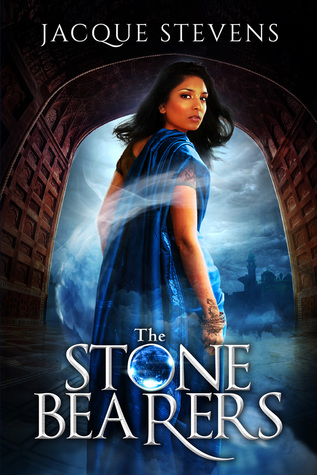 After years dreaming of oceans, princes, and fairies, she expected to hear the words that would finally whisk her away from her ordinary desert village. Instead she hears, “you will live a life of no renown.”

Ready to choose her own fate, she discovers a djinni’s bottle and starts making wishes. When the djinni proves uncooperative and annoying, Ashira sets out to the great city of magicians to learn magic and free herself from an uneventful life as a potter’s daughter.

But there is another prophecy being whispered in the shadows. It is said that among the great magicians, there is a demon on the rise with the power to destroy the world. The djinni might be Ashira’s only chance to become someone important, or he just might be the very demon that triggered the dark prophecy.

With the world on the brink of destruction, can Ashira fight her fate and stop the forces that threaten to upset the balance of the universe?

Prepare yourselves: I am about to rip this book apart.

The story starts off promising enough, with a somewhat familiar yet compelling promise of magic-in-a-bottle. Ashira receives her prophecy, and being the whiny fifteen year-old (who acts like a nine year old) she is, she wishes for something amazing to come into her life.

Right away the setting is dull and unoriginal. I’ve noticed that most fantasies always have an eastern-type culture and a European-type culture, with one seen as “barbarians” and the other as “sophisticated”. This one is no different, and Stevens doesn’t go through the trouble of even adding imaginative customs-everything is borrowed from real life. The world development is weak at best, with no ingenuity whatsoever.

Ashira, our protag, is whisked away to the temples, a place to learn magic–well, supposedly. Stevens, for some reason, describes barely one scene of actually learning magic. The description of the temples is vague and odd, which doesn’t quite make it as mysterious as the author wants it to be. The religion at the temples isn’t described in too much detail either-the author just jumps in, leading readers in a confusing labyrinth of random deities and rules and magic.

And the magic. Ugh, the magic. The magic system is so underdeveloped and makes no logical sense whatsoever. We learn nothing about it, other than people called bearers can wield it and no one else can. Except the genie??? Um? But somehow they’re teaching it to students? Who shouldn’t be able to do magic?

The plot as a whole is just weak. It’s directionless and doesn’t flow nicely, with random choppy scenes interjected between “main events”. Often times, I had no clue what was happening because of lack of explanation on Steven’s part. It’s like she had this whole world in her head and wrote a book about it expecting the readers to already know that world. The writing style also adds to the bad flow. The syntax and vocab is repetitive and basic: it reads like a middle grade. The entire thing is nonsensical and predictable.

Speaking of middle grade, I feel like that’s how old the characters should have actually been. They were supposed to be fifteen (which is an awkward age to begin with), but they were all naïve, immature, and sorry to say it, but just plain stupid. Ashira is whiny and greedy, with no depth whatsoever, and Raven is the same, but with straw in her head instead of a brain. All the characters are so shallow. I have no words to explain  it, but they just lack a spark. They’re just puppets to the plot.

Also, this may be a weird complaint, but a lot of interactions that shouldn’t be happening between characters are happening. Let me explain: high-ranking nobles are randomly striking up conversations with lowly apprentices. Also, the “bearers” of the temple, basically the leaders, somehow know our protag despite her being one of hundreds of novices, only pages after her going to the temples. The prince and princess randomly start talking to Ashira during a tournament. Like? Where did they come from? Where are their guards?

Anyway, I highly recommend that you stay away from this book. It’s a combination of all the worst aspects of fantasy (unimaginative world, shallow characters, confusing magic, lack of purpose) and was honestly a waste of time.

4 responses to “The Stone Bearers by Jacque Stevens”