The Creeping by Alexandra Sirowy 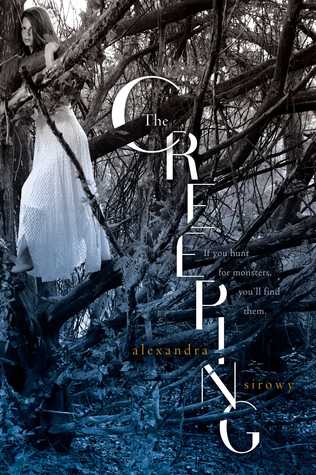 Eleven years ago, Stella and Jeanie disappeared. Only Stella came back.

Now all she wants is a summer full of cove days, friends, and her gorgeous crush – until a fresh corpse leads Stella down a path of ancient evil and secrets.

Stella believes remembering what happened to Jeanie will save her. It won’t.

She used to know better than to believe in what slinks through the shadows. Not anymore

This is one of those annoyingly addictive books that I couldn’t seem to put down. There was so much wrong with it, yet I found myself wanting to read more. Even though I hated most of the characters, the plot was extremely interesting.

Let’s start with the bad: the protagonist. Meet Stella Cambren, a rude-ass beoch who blames her whiny, pity-party behavior on everyone but herself. Just when I think she can’t get any worse, she goes and says something totally punch-in-the-face worthy. I understand that her character is supposed to mimic realistic teenage behavior, but Stella was so poorly developed that I can’t be lenient. The only thing worse than Stella was her best friend, Zoey. The author attempted  to portray a loyal, fierce girl who was like a sister to Stella, but the relationship could be seen as abusive at best. Sure, there was no physical violence, but Zoey emotionally manipulated Stella into acting like the world’s meanest mean girl–all under the guise of “friendship”. Sirowy even mentioned in the acknowledgements that the book was about friendship, but all I see are petty, jealous girls who only care about the image that friendship brings them. There was a bit of character development at the end, but not enough to salvage the rest of the book.

Thank God, there was one tolerable character. Actually, he was more than tolerable–I actually liked him, a lot. Sam Worth is your cute, sweet, too-good for this earth Boy Next Door. Unfortunately he had bad taste in girls (coughStella), but this could be overlooked because he was the only reasonable and decent person in this story. He gets walked all over, but he remains optimistic and incredibly adorable. I couldn’t help but think of another young Sam W. He provided a positive relationship with Stella that this book needed–while it wasn’t a completely swoon-worthy romance, Sam’s value of Stella as a person and not as a body gets brownie points from me. It’s an example of what a healthy (when Stella isn’t being annoying),  consensual relationship should look like.

The book also had an intriguing plotline going for it, saving it from a 1-star bashing fest. Throughout the novel, Sirowy has the reader suspecting both the human and supernatural (which is terrifying, because which would be worse? The fact that humans are capable of immense evil, or that the devil is real?). There comes a point in almost every mystery that it becomes impossible to put down. The tension between the characters and the fear of the unknown  was built beautifully, and the resulting atmosphere was eerie and shiver-inducing. I was making guesses and predictions along with the characters (which ended up being totally wrong), and the roller-coaster of suspense was crafted extremely well. The ending was not what I expected at all–it could have been better, but it also could have been much worse. I think the ideas of morality and human nature that the story provoked were more relevant than the resolution itself.

Unfortunately, the writing itself wasn’t up to par. While the themes in the novel are mature enough to be considered young adult, the writing belongs in a preteen book. The prose was choppy, inelegant, and immature. Some of my favorite phrases were “soooo hot”, “eeeek!”, and “uhhhh?”. Real profound, am I right? The whole novel was written in what sounded like a thirty year old trying to imitate an early two-thousands teen and failing miserably. Like seriously, as a sixteen year-old, I can verify that no one, no one, uses the words “amazeballs” and “epically random”.

As far as a horror/mystery goes, this book would have gotten almost 5 stars from me. Unfortunately, the poorly written characters/relationships/prose knocked it down to 3.5. To sum it up in two words: annoyingly addicting.

One response to “The Creeping by Alexandra Sirowy”