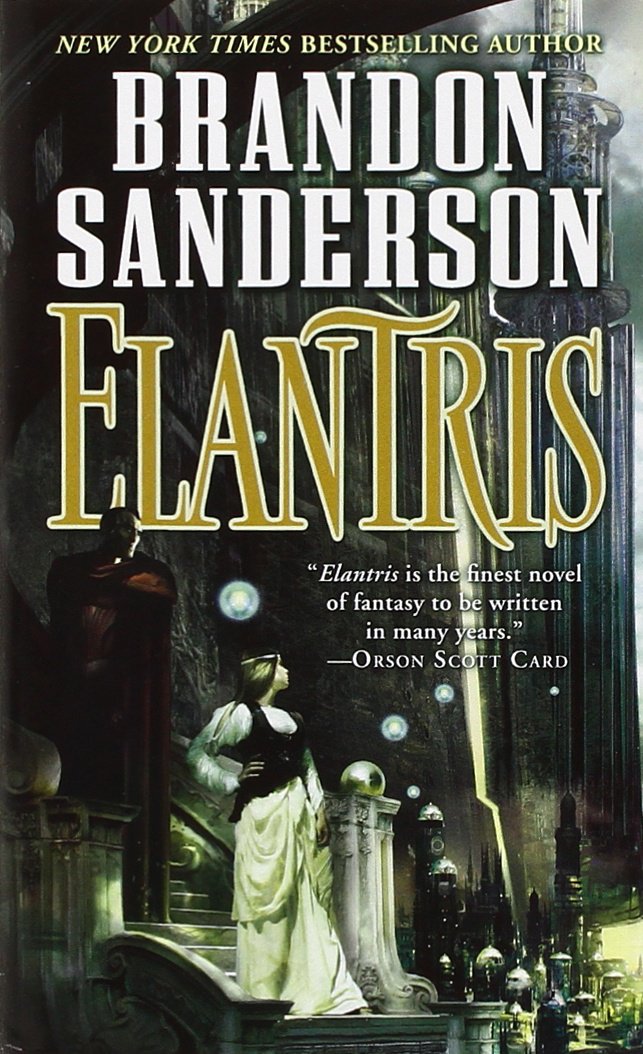 Elantris was the capital of Arelon: gigantic, beautiful, literally radiant, filled with benevolent beings who used their powerful magical abilities for the benefit of all. Yet each of these demigods was once an ordinary person until touched by the mysterious transforming power of the Shaod. Ten years ago, without warning, the magic failed. Elantrians became wizened, leper-like, powerless creatures, and Elantris itself dark, filthy, and crumbling.

Arelon’s new capital, Kae, crouches in the shadow of Elantris. Princess Sarene of Teod arrives for a marriage of state with Crown Prince Raoden, hoping — based on their correspondence — to also find love. She finds instead that Raoden has died and she is considered his widow. Both Teod and Arelon are under threat as the last remaining holdouts against the imperial ambitions of the ruthless religious fanatics of Fjordell. So Sarene decides to use her new status to counter the machinations of Hrathen, a Fjordell high priest who has come to Kae to convert Arelon and claim it for his emperor and his god.

But neither Sarene nor Hrathen suspect the truth about Prince Raoden. Stricken by the same curse that ruined Elantris, Raoden was secretly exiled by his father to the dark city. His struggle to help the wretches trapped there begins a series of events that will bring hope to Arelon, and perhaps reveal the secret of Elantris itself.

A rare epic fantasy that doesn’t recycle the classics and that is a complete and satisfying story in one volume, Elantris is fleet and fun, full of surprises and characters to care about. It’s also the wonderful debut of a welcome new star in the constellation of fantasy.

Read below for my spoiler-free review.

This is the second Sanderson book that I’ve read, and I’ve heard that most people consider this one of his lower points (it was his first book), but I have to disagree. Mistborn is one of my favorite fantasy novels of all time, and Elantris has taken a place right next to it (I’ll probably be referencing Mistborn frequently as a point for comparison because I really liked it). Although it’s clear that his writing and artistry has progressed immensely since his debut, I’m thoroughly impressed by the way he wove an original and complex storyline in a manner that was both engaging and easy to read.

The story is pretty slow to start and progress, but it wasn’t in any way a detriment to the novel. This may not be the kind of book for everyone, but I enjoyed the pace. Since the plot was largely based on political intrigue, it was essential that Sanderson take the time to define the setting–as a result, the world building was thorough, and allowed for a lot of the story elements to come together in a unique way. I was constantly intrigued by new revelations about the various nations involved and how they related to one another. The world wasn’t super extensive,  but there was an in-depth view of what we did get to see. I think there could be a lot more expansion if Sanderson chose to add to the series (the book is a standalone), but what we had was definitely sufficient for the plot.

Sanderson has a knack for originality in his worlds and magic systems, and Elantris was no exception. While it wasn’t as cool as the allomancy from Mistborn, it had its own merits. I do have to say that I don’t quite like how it was used at the end of the book. Our main character makes several revelations regarding the magic that seem somewhat farfetched considering the hints that were dropped before; some of it just seems a little too convenient. It also wasn’t as present as I’d expect from a high fantasy novel–but, again, I don’t think this detracted from the novel.

I thought the three main characters were exceptionally written, especially Hrathen, who is one of our antagonists. The narrative alternates between him, Raoden, and Sarene–I thought that this was effective as a device to tell the story because we got to see viewpoints of different parts of the city and the plot line. Hrathen’s chapters were very distinct, and I really enjoyed his development as a character. He seemed to be the most substantial and complex, while Raoden and Sarene sort of blended together. While they are both strong, admirable characters, I thought they were slightly overdone. Raoden is just a little too clever and too optimistic, without any flaws or discernible personality. Sarene is sassy and assertive, but for being such a strong woman is often concerned about what men think of her. Nevertheless, the trio drove the story in a dynamic way.

Sanderson’s stylistic choices, or lack of them, is probably one of the lower points of the novel. It is written with simple prose that doesn’t leave any room for interpretation. It gets the story across, and I suppose that’s what matters. There is a little to be desired, but if the book had been any denser it might have been much harder to read. So while some artistry would be appreciated, it was more than made up for by the phenomenal storyline. It’s been a while since I’ve been so motivated to read such a long book, and I got through it very quickly. It was truly a page-turner and I was sad to see it end. Although it may seem that I was criticizing it lower than the point of 4.9 stars, that’s just because I held it to a really high standard–it was hard to find any fault.

I’m really glad I decided to pick this up! The length can be slightly intimidating but it goes by quickly. I’d highly recommend.