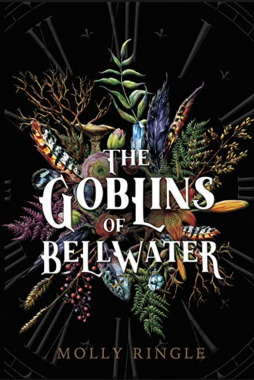 Most people have no idea goblins live in the woods around the small town of Bellwater, Washington. But some are about to find out. Skye, a young barista and artist, falls victim to a goblin curse in the forest one winter night, rendering her depressed and silenced, unable to speak of what happened. Her older sister, Livy, is at wit’s end trying to understand what’s wrong with her. Local mechanic Kit would know, but he doesn’t talk of such things: he’s the human liaison for the goblin tribe, a job he keeps secret and never wanted, thrust on him by an ancient family contract.Then Kit starts dating Livy, and Skye draws Kit’s cousin Grady into the spell through an enchanted kiss in the woods. Skye and Grady are doomed to become goblins and disappear from humankind forever, unless Livy, the only one untainted by enchantment, can unravel the spell by walking a dangerous magical path of her own.

I have always loved stories about the fae that dwell just beyond the human world–this can include goblins, elves, fairies, and countless other creatures. Some of my favorites in this genre include An Enchantment of Ravens and The Treachery of Beautiful Things. I thought I’d give this one try, and it was about what I expected. Nothing amazing, but entertaining nonetheless.

If you’re looking for a story with depth, originality, and elegance, then this is not the book for you. I gave it three stars because it is average: nothing more, nothing less. The characters, while bland, aren’t annoying. The book is short enough that even the slow parts weren’t too boring, and the action was just intense enough to keep me reading. It’s a short, simple read with basic prose and very little stylistic voice. I would say that it is targeted towards younger readers, but it is a bit mature in terms of sex–there is no explicit detail, however, I wouldn’t recommend it for a pre-YA audience.

Overall, the book was simple with just enough intrigue to make me want to read it. It’s not a great novel by any standards, but it’s something I would pick up for a short read on a rainy afternoon. It’s super cheesy, but that’s what makes books like these fun to read sometimes. (Key word: sometimes. Normally I wouldn’t tolerate a book like this but I haven’t read something so unambitious in a long while).

(P.S. Sorry for posting twice in one day! I wanted to get my review up on Netgalley ASAP. Disclaimer: I received this ARC from Netgalley in exchange for an honest review. Granted, it came out a year ago…but at the time I downloaded it, it was an ARC. lol it took me a while to get around to it)